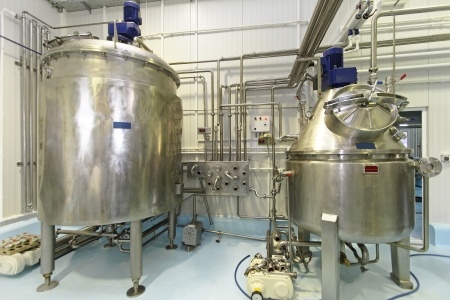 Greek Yogurt: How is made

Boiling the milk in open containers produces yogurt in the form we know, while two processes are being made simultaneously; Water evaporation and milk sterilization. After boiling process milk is allowed to cool until it reaches the temperature in which it was the time of the collection (milking). Then it is inoculated with yogurt already prepared, and then it is covered and left in a relatively warm environment to cool slowly for several hours without being moved. During this time it incubates, gels and then is ready for consumption. The yogurt should be kept refrigerated and maintained at 4 degrees Celcius and stored until consumption.
Yogurt is a dairy product produced after fermentation of milk with special lactic acid bacteria. These bacteria are a combination of lactobacilli (Lactobacillus bulgaricus) and a lactic streptococcus (Streptococcus thermophilus), which acting together cause the coagulation of the milk and the particular form of yogurt flavor characteristics.
Thanks to these bacteria , which are contained in large populations (tens of millions) in each gram of yogurt and generally because of changes in milk by fermentation caused by these bacteria , yogurt is not only an excellent food , better than the milk from which it is produced , but also has wider ' beneficial ' effects on health.